How do you know if you are addicted to food?

Often this label we give ourselves is all tied up in a history of chronic dieting which has led to restriction followed by bingeing cycles. It is easy to feel addicted to food, when we go through long periods of time denying ourselves.

So, the first question is:

Can you get addicted to food?

It is incorrect to use the term addicted as it is impossible to be addicted to something which is essential to life. Breathing and sleeping for example are kind of important and it would be crazy to think we could be addicted to them. But food in essence is the same. Without it we will not survive, so to say we are addicted to it, just doesn’t make sense.

How common is food addiction?

So why is it then, so many of us do feel addicted to certain foods? Well, the brain does have a neurochemical response to food, causing the release of ‘feel-good’ hormones such as dopamine. We’re programmed to remember habits that are rewarding so that we repeat them, and hormones such as dopamine help us do that. Our primal brain also knows that high calorie foods will restore the equilibrium more quickly, which is in our best interests for survival.

This is more pronounced when the body detects an imbalance, such as that created by calorie restricted dieting. We’re drawn towards the very foods we’re trying so hard to avoid, confirming our worst fears – that we must be addicted! As a cruel double blow, the body will interpret calorie restricted dieting as a threat, which puts us into defence mode. In this ‘mode’ the sympathetic nervous system takes over which further serves to deregulate appetite and mess up how we metabolise food.

Whilst keeping food as the enemy, we’re effectively swimming around in stress chemistry which just makes everything a whole lot harder. But instead of getting out of the water and looking objectively at the pool, we stay in it, smacking ourselves over the head with a dive stick. Random analogy there, sorry but you get my point. 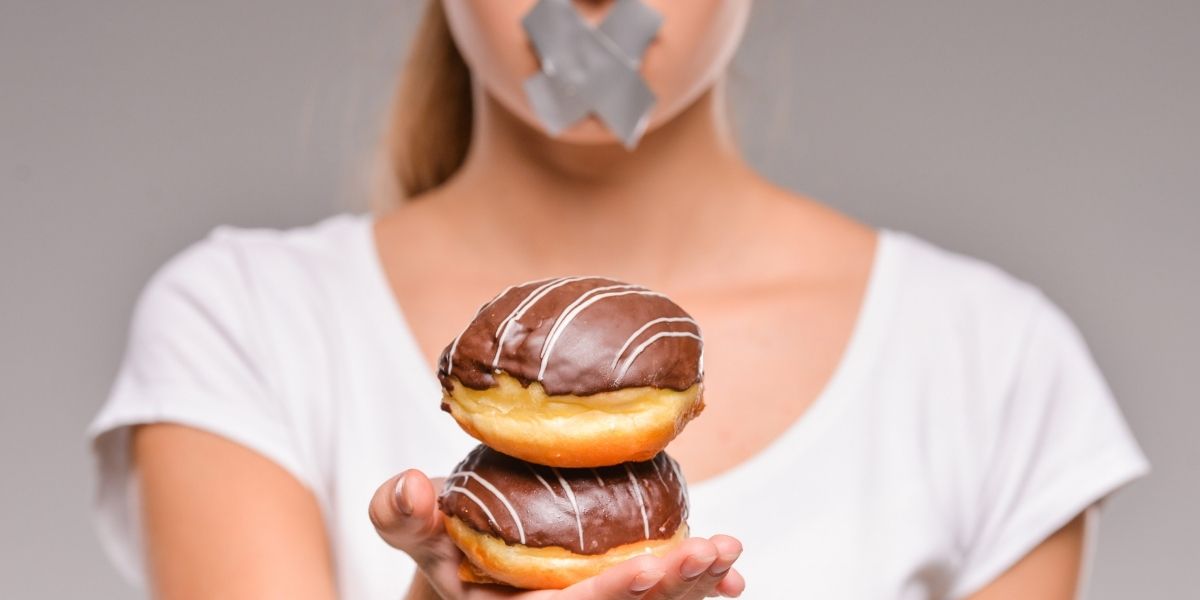 How do I stop my food addiction?

I invite you to approach all your food behaviours and habits with a spoonful of curiosity. All too often we apply human rationale logic, when in truth the body is far more complex than we give it credit for. The classic calories in, calories out equation is not even accurate, when we consider the number of metabolic adaptations that the body undergoes with repeated dieting.

Certain foods – containing sugar or caffeine for example – may well become a huge part of our habitual behaviour – we become conditioned to the ‘hit’ that these foods give us and the neurological cascade they trigger. In reality though, the effects are very mild, in comparison to substances that we know to be truly addictive, for example drugs and alcohol.

As well as the physical response, there are also huge emotional connections to certain foods, often formed when we were growing up or trying to figure out who we are. We develop various thoughts and beliefs, some of which won’t be factual or accurate, but that doesn’t make them any less believable unfortunately.

We know food to work as a coping strategy – again that’s why we repeat it, even though we can perhaps acknowledge it’s a temporary fix, squashing a feeling or emotion that we’re not ready to face or work through.

So, it comes back down to what is driving these behaviours and draw towards these foods – when removing the label of ‘being an addict’ we can take a more proactive, compassionate look at all the influencing factors.

Understanding what might be going on inside the body is a key first step. To support you taking a look at this you may like my 3-step plan to Cracking the Cravings helpful, which you can download for free here.
It takes you through different kinds of cravings, the factors that influence your pull towards certain foods and sets out how to approach things differently with a balanced blend of science and heart.

Give yourself the opportunity to unwind from the toxicity of the labels, tune into your physiology and set yourself up to win.